Irenaeus against the Gnostics

Irenaeus (2nd century AD – c. 202) was Bishop of Lugdunum in Gaul, then a part of the Roman Empire (now Lyon, France). He was an early church father and apologist, and his writings were formative in the early development of Christian theology. He was a hearer of Polycarp, who in turn was a disciple of John the Evangelist. Irenaeus’ best-known book, Adversus Haereses or Against Heresies (c. 180) is a detailed attack on Gnosticism, which was then a serious threat to the Church, and especially on the system of the Gnostic Valentinus.  Source: Wikipedia: Irenaeus 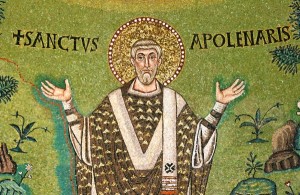 Apollinaris “the Younger” (died 390) was a bishop of Laodicea in Syria. Best known as a noted opponent of Arianism, Apollinaris’ eagerness to emphasize the deity of Jesus and the unity of his person led him so far as to deny the existence of a rational human soul in Christ’s human nature, this being replaced in him by the logos, so that his body was a glorified and spiritualized form of humanity.  Source: Wikipedia: Apollinaris of Laodicea

Theodore the Interpreter (ca. 350 – 428) was bishop of Mopsuestia (modern Yakapinar) from 392 to 428 AD. He is also known as Theodore of Antioch, from the place of his birth and presbyterate. He is the best known representative of the middle School of Antioch of hermeneutics.  Source: Wikipedia: Theodore of Mopsuestia 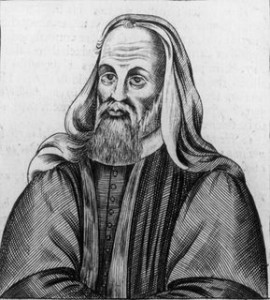 Pelagius on Creation and Redemption

Pelagius (ca. AD 354 – ca. AD 420/440) was an ascetic who denied the need for divine aid in performing good works. For him, the only grace necessary was the declaration of the law; humans were not wounded by Adam’s sin and were perfectly able to fulfill the law apart from any divine aid. He also, therefore, denied the more specific doctrine of original sin as developed by Augustine of Hippo. Pelagius was declared a heretic by the Council of Carthage. His interpretation of a doctrine of free will became known as Pelagianism.  Source: Wikipedia: Pelagius 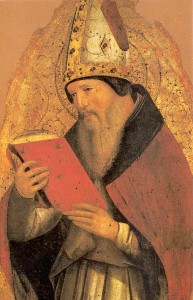 Saint Augustine on Salvation and the Christian Life

Augustine of Hippo (November 13, 354 – August 28, 430), also known as Augustine, St. Augustine, was Bishop of Hippo Regius (present-day Annaba, Algeria). He was a Latin philosopher and theologian from Roman Africa. His writings were very influential in the development of Western Christianity. According to his contemporary, Jerome, Augustine “established anew the ancient Faith.”  Source: Wikipedia: Augustine of Hippo

Saint Anselm: Why the God-Man?

Anselm of Canterbury (c. 1033 – Canterbury 21 April 1109), also called of Aosta for his birthplace, and of Bec for his home monastery, was a Benedictine monk, a philosopher, and a prelate of the church who held the office of Archbishop of Canterbury from 1093 to 1109.  Called the founder of scholasticism, he is famous as the originator of the ontological argument for the existence of God.  Source: Wikipedia: Anselm of Canterbury

Peter Abelard (1079 – April 21, 1142) was a medieval French scholastic philosopher, theologian and preeminent logician. The story of his affair with and love for Héloïse has become legendary. The Chambers Biographical Dictionary describes him as “the keenest thinker and boldest theologian of the 12th Century”. Source: Wikipedia: Peter Abelard 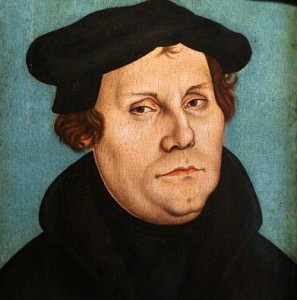 Martin Luther (10 November 1483 – 18 February 1546) was a German monk, priest, professor of theology and iconic figure of the Protestant Reformation. He strongly disputed the claim that freedom from God’s punishment for sin could be purchased with money. He confronted indulgence salesman Johann Tetzel with his Ninety-Five Theses in 1517. His refusal to retract all of his writings at the demand of Pope Leo X in 1520 and the Holy Roman Emperor Charles V at the Diet of Worms in 1521 resulted in his excommunication by the pope and condemnation as an outlaw by the Emperor. Luther taught that salvation is not earned by good deeds but received only as a free gift of God’s grace through faith in Jesus Christ as redeemer from sin.  Source: Wikipedia: Martin Luther 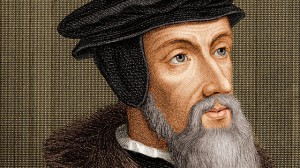 John Calvin (10 July 1509 – 27 May 1564) was an influential French theologian and pastor during the Protestant Reformation. He was a principal figure in the development of the system of Christian theology later called Calvinism. Originally trained as a humanist lawyer, he broke from the Roman Catholic Church around 1530. After religious tensions provoked a violent uprising against Protestants in France, Calvin fled to Basel, Switzerland, where he published the first edition of his seminal work The Institutes of the Christian Religion in 1536.  Source: Wikipedia: John Calvin

Friedrich Schleiermacher (November 21, 1768 – February 12, 1834) was a German theologian and philosopher known for his attempt to reconcile the criticisms of the Enlightenment with traditional Protestant orthodoxy. He also became influential in the evolution of Higher Criticism, and his work forms part of the foundation of the modern field of hermeneutics. Because of his profound impact on subsequent Christian thought, he is often called the “Father of Modern Liberal Theology.”  Source: Wikipedia: Friedrich Schleiermacher

John Wesley (28 June 1703 – 2 March 1791) was a Church of England cleric and Christian theologian. Wesley is largely credited, along with his brother Charles Wesley, as founding the Methodist movement which began when he took to open-air preaching in a similar manner to George Whitefield. In contrast to George Whitefield’s Calvinism, Wesley embraced the Arminian doctrines that were dominant in the 18th-century Church of England. Methodism in both forms was a highly successful evangelical movement in the United Kingdom, which encouraged people to experience Jesus Christ personally.  Source: Wikipedia: John Wesley 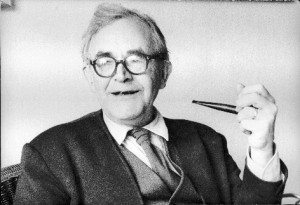 Karl Barth (May 10, 1886 – December 10, 1968) was a Swiss Reformed theologian whom critics hold to be among the most important Christian thinkers of the 20th century; Pope Pius XII described him as the most important theologian since Thomas Aquinas. Beginning with his experience as a pastor, he rejected his training in the predominant liberal theology typical of 19th-century European Protestantism. Instead he embarked on a new theological path initially called dialectical theology, due to its stress on the paradoxical nature of divine truth (e.g., God’s relationship to humanity embodies both grace and judgment). Other critics have referred to Barth as the father of neo-orthodoxy — a term emphatically rejected by Barth himself.  Source: Wikipedia: Karl Barth

Adolf von Harnack (7 May 1851–10 June 1930), was a German theologian and prominent church historian. He produced many religious publications from 1873-1912. Harnack traced the influence of Hellenistic philosophy on early Christian writing and called on Christians to question the authenticity of doctrines that arose in the early Christian church. He rejected the historicity of the gospel of John in favor of the synoptic gospels, criticized the Apostles’ Creed, and promoted the Social Gospel.  Source: Wikipedia: Adolf von Harnack

This site uses Akismet to reduce spam. Learn how your comment data is processed.